Delta will launch new daily nonstop services from New York-JFK to Cancun and from Los Angeles to Los Cabos. In addition, the airline will offer Saturday service from Kansas City to Cancun starting Dec. 17, 2016. The three new routes are the first to be launched since the implementation of Mexico-United States Open Skies Agreement was announced.

“The new routes bolster our presence in Mexico and support our international growth strategy,” said Carlos E. Hernandez, Delta’s Director— Mexico. “Delta thanks the U.S. and Mexican governments in the signature of the Open Skies Agreement as it sets the stage for additional expansion in the transborder market. We are eager to provide Delta’s customers with more choices in the growing Mexico marketplace.”

“As the fastest-growing carrier at LAX since 2009, Delta is working hard to become the preferred airline for Angelenos,” said Ranjan Goswami, Delta’s Vice President of Sales— West Region. “Providing access to Los Cabos supports Delta’s transborder market growth, this time with an exciting leisure destination. Along with our alliance partner Aeroméxico, Delta offers 15 nonstop markets to Latin America from LAX and connects to more Mexican destinations than any other carrier from L.A.”
Haz clic para expandir...

Delta Airlines starting December 2017 is expanding Mexico service, with the offering of Los Angeles – Mexico City nonstop flight. From 01DEC17, the Skyteam member will operate this route on daily basis, with Airbus A319 aircraft.

The flight is an important addition for Delta at LAX, marking the airline’s return to the L.A.-Mexico City market for the first time since 2005 and further strengthening Delta and Aeromexico’s No. 1 position in the market. In May, the airlines announced five new non-stop markets starting by the end of 2017: Atlanta to Merida and Queretaro, Mexico; Los Angeles to Leon, Mexico; and Seattle and Portland to Mexico City. The new and increased service comes as the airlines implement a Joint Cooperation Agreement, the No. 1 airline alliance between the U.S. and Mexico, under which the carriers will provide customers with expanded travel options and choice while deepening the relationship they have shared for more than 20 years.

“L.A. is the No. 1 U.S. market to Mexico, and together Delta and Aeromexico offer the absolute best schedule between our hub at LAX and Aeromexico’s hub in Mexico City with 7 daily flights,” said Ranjan Goswami, Delta’s Vice President – Sales, West Region. “Our combined schedule gives customers access to more choices and 20 destinations beyond L.A., and our recent relocation to Terminals 2 and 3 makes it more convenient than ever for customers to connect to those destinations from LAX.”

"2017 is the year of Mexico in Los Angeles, a testament to the great numbers of Mexican Americans who call Los Angeles home, and the many more Angelenos who visit family and friends, vacation or do business in Mexico each year,” said Deborah Flint, CEO of Los Angeles World Airports. "International flights are a strong driver of economic activity for our region, and I applaud Delta’s decision to return to the Mexico City market after 15 years."

The Los Angeles-Mexico City flight will be operated using an Airbus A319 aircraft, which features new seats throughout the cabin with adjustable headrests, new seatback in-flight entertainment screens, in-seat power available for all customers, high capacity overhead bins, ambient lighting, as well as new lavatories. Delta’s A319s have a total of 132 seats, 12 in First Class, 18 in Delta Comfort+ and 102 in Main Cabin. All aircraft flying to and from Mexico have AVOD, Wi-Fi and power at every seat.
Haz clic para expandir... 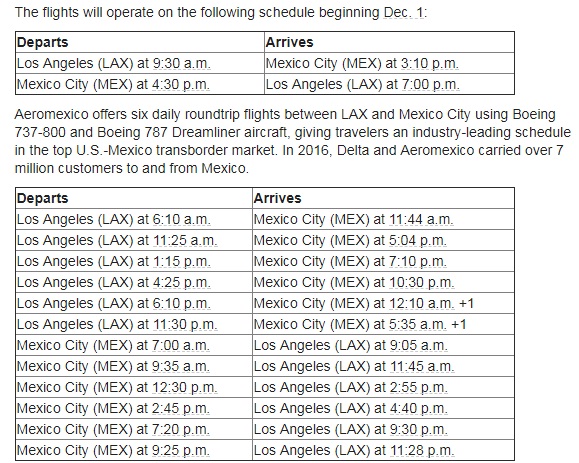