All Nippon Airways May Seek Damages From Boeing Over 787 Problems

All Nippon Airways May Seek Damages From Boeing Over 787 Problems

TOKYO (AP) — Japan's All Nippon Airways is prepared to recoup from Boeing whatever damages it suffers from flight cancellations and other costs caused by the worldwide grounding of 787 jets, a senior executive said Thursday.

All Nippon Airways Co. Chief Financial Officer Kiyoshi Tonomoto said the airline was focused on investigating the cause of the 787 battery problems, and it was not yet in damage negotiations with Boeing Co. He also said efforts were focused on minimizing flight disruptions and revenue losses by using other aircraft.

"But we will negotiate with Boeing," Tonomoto told reporters. "We are now focusing on assuring safety for our customers."

ANA, the biggest customer for the Dreamliner with 17 of the jets in its fleet, canceled 459 domestic and international flights canceled this month, causing about 1.4 billion yen ($15.4 million) in lost revenue. It said it was unclear when the aircraft will be cleared by regulators to fly again.

All 50 Boeing 787s in use around the world were grounded earlier this month after a lithium-ion battery in a 787 operated by ANA overheated. The plane was forced to make an emergency landing at an airport in southwestern Japan, shortly after takeoff. Earlier in January, a 787 operated by ANA's rival Japan Airlines, suffered a battery fire while parked at a Boston airport.

ANA and JAL were the first carriers to stop flying the 787 jets, known as the Dreamliner.

Tonomoto said ANA revenue will be eroded by about 3 percent for this fiscal year ending March 31 if the 787 services can't be resumed, but that will translate to minimal impact on profit. Such losses will be gradually reduced over coming months, he said.

ANA, the eighth biggest airline in the world by revenue, stuck to its forecast for a 40 billion yen ($440 million) profit in the current fiscal year, up nearly 12 percent from the previous year, despite the 787 woes.

The number of international passengers for the April-December period jumped 10 percent, while the number of domestic passengers rose nearly 7 percent, and as both business and leisure travel picked up for ANA. The recovery came despite a fall in travel to China, where anti-Japanese sentiment flared up over a territorial dispute in the latter half of 2012.

ANA's summer travel offerings were made on the assumption that it would have the 787 jets and so, if the grounding goes on longer, the plans will have to be remapped.

Flight plans for February and beyond were still undecided, and the carrier won't have a midterm plan until the 787 problems are cleared up, it said.

ANA hopes to fix whatever is wrong with the 787 as quickly as possible and, when services are ready to resume, hopes to give a full explanation so customers can feel the jets are safe, Tonomoto said.

Boeing CEO Jim McNerney said Wednesday the U.S. manufacturer is sticking with plans to speed up 787 production and sees no reason to drop the lithium-ion batteries.

Airlines have been replacing 787 batteries at a rate that's "slightly higher" than Boeing had expected, but they were being replaced for maintenance reasons, not for safety concerns, he said.

McNerney said "good progress" is being made in finding the cause of the problems, but didn't have a timeline for when the plane would get back in the air.

The 787 is an innovative aircraft. It is powered by electricity more than older aircraft and its body is carbon fiber, not aluminum like standard planes. Major Japanese manufacturers have supplied key parts of the jet, including the lithium-ion battery at the center of the investigation.

The battery's manufacturer, GS Yuasa, based in Kyoto, has refused comment while the investigation is ongoing.

Still, Tonomoto had only praise for the 787, for its fuel-efficiency but also for a cabin that's more comfortable for fliers than older aircraft.

"I think it is a fantastic plane," he said at the Transport Ministry. "Once this incident is dealt with, it will again be assessed as a quality plane."
T 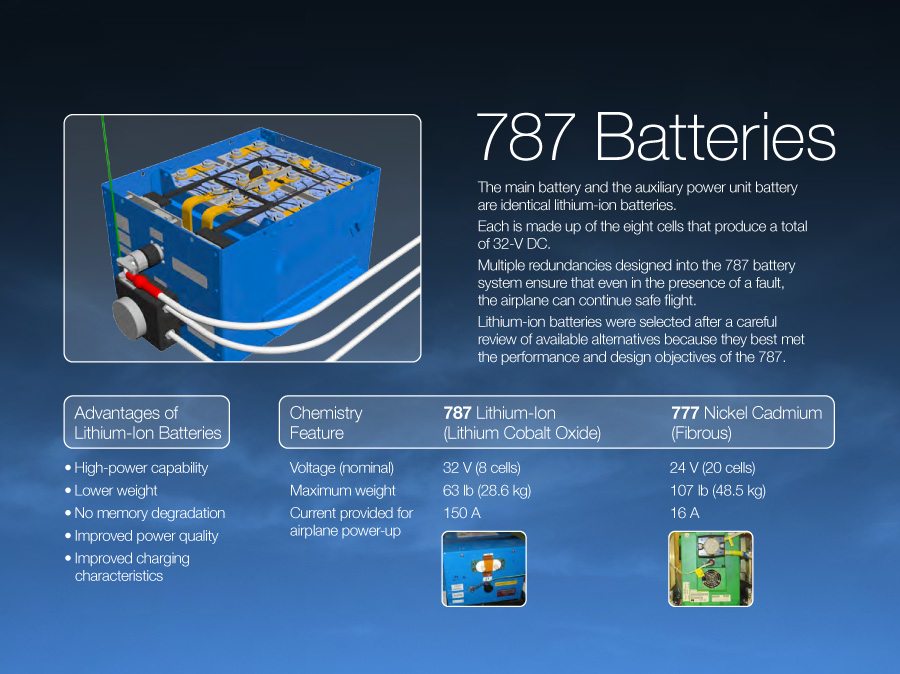