"We are closely looking at your planes," Aeromar chief executive Andres Fabre said on 14 February when asked if the airline would consider placing an aircraft order with John Slattery, Embraer's chief executive of commercial aviation. "We are going to try to upgauge as much as we can."

Fabre and Slattery were both speakers at the Routes Americas event in Las Vegas.

In the short term, Aeromar will continue to acquire more ATR turboprops and launch routes to more cities within Mexico and to the USA, says Fabre.

Mexico City-based Aeromar in November 2016 announced an order for eight ATRs, deliveries of which are scheduled for the first half of 2017. The aircraft comprise two ATR 42-600s and six ATR 72-600s.

The incoming aircraft will push Aeromar's capacity up more than 40% year-over-year in 2017, notes Fabre.

Aeromar already serves Tucson in Arizona and McAllen in Texas, but may announce new US routes in the coming days, he says.

"We are going to grow," says Fabre. "We are going to fly more regional routes connecting midsize cities in Mexico, and we will expand to other [airports] that are not as slot-constrained."

Also in November, it emerged that Synergy Aerospace, which owns a majority stake in Avianca, would invest up to $100 million in Aeromar and acquire up to 49% of the carrier.

"We expect that the investment would start flowing into Aeromar within the next five or six months," he says.
Haz clic para expandir... 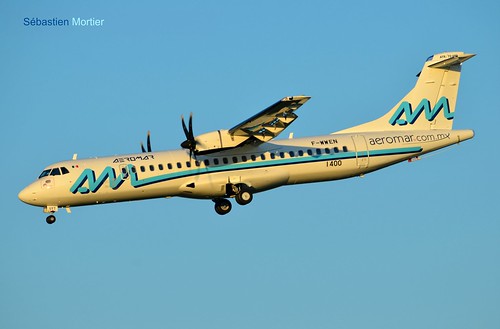